Not many countries have been able to avoid catastrophic inflationary crises in the 20th century, but the U.S. has been one of the rare few, who have dodged the bullet.

Inflation occurs, primarily, with countries that need to borrow foreign currency to grow because once they run into trouble, they must print currency in mass amounts, to service their USD debts.

You can see examples of this with emerging markets right now, specifically in Argentina, Venezuela, and Turkey, but the many cases that we’ve seen during the 20th and 21st centuries are innumerable. 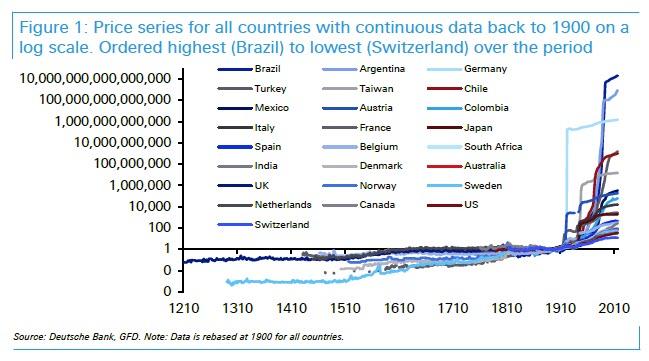 Courtesy: Zerohedge.com
Widespread inflation is a new occurrence in the human experience, as you can see, by analyzing the history of hockey-stick inflation crises.During the middle ages, for nearly 600 years, most prices were, pretty much, the same all throughout a person’s life. The problem only originated around 1913, when the Federal Reserve incorporated on Jekyll Island.

From that point on, inflation has been a constant reality in the average person’s experience.

For citizens of the U.S., though, inflation has been only a boogeyman, who appears in the collective national nightmare scene, but, as of yet, we’ve not seen it wreak havoc of double-digit proportions on the currency. Sure, there’s inflation out there, but it is mostly hovering at the 2%-3% level, so that wage growth, asset appreciation, and fixed-income investments, have been able to outpace it and shrink its effects on most of the population base. There will always be professions, which stagnate in wages and there will always be investors, who fail to beat inflation, due to their own mistakes, but, as a whole, the U.S. has never had to deal with what the Turkish people are now facing.

The reason for this is that the USD is the world’s reserve currency, so foreigners are forced to accept it in greater amounts than they would other currencies. On top of that, they actually need the USD to settle trade payments on the global commerce economy.

As the Federal Reserve keeps shrinking its balance sheet by selling bonds and allowing them to mature, the rest of the world is forced to buy even more Treasury debt, now that the Central Bank isn’t participating. This trend, which will continue to accelerate in the years ahead in the U.S., will also become the norm in Europe. Central Banks are looking to limit their bond exposure, which means that other buyers will have to take their place.

Enormous pressures will be put on the dollar’s creditworthiness, then. Because of the high levels of cash on the sidelines, we estimate that at least 2% of the institutional asset allocation will migrate to gold and silver, instead of to USD instruments. As it stands, it is less than 0.86% of the institutional portfolio today.

In other words, as the current dollar shortage in emerging markets blows past us, and the U.S. faces the need to issue more new debt to fund its growing liabilities, while the rest of the world looks to shrink its debt loads, interest rates might go much higher, as well as inflation levels, since this will be the only FED tool left to deploy, which could lessen the debt burden on the government.

At 2% globally, we anticipate gold prices to hit $1,704 by 2022, a full 42% above today’s spot price. With gold mining production peaking around the same time, this is when we see the mining industry reach its bull market climax.

Well ahead of that, though, towards the next election cycle, is when we foresee investors beginning to price in these problems, so that this bear market in commodities that we are undergoing at the moment will be over with. Taking its place will be a rising trend, which will be at full display by 2022.

Put differently, the next president will immediately have to tackle a potential run on the dollar. In fact, as a foreign enemy, a rising power like China, hitting the U.S. right around the time of a shift in power, seems like a smart tactic.

Between now and two years into the future, there’s plenty of time to make huge gains elsewhere, though.

This Thursday, I will show you a case study of the very first stock I purchased, back when I was still a minor, only 16 years old. To this day, I’m a shareholder of this company.

Right now is not the time to add to this position, since the stock’s price is overvalued, but the business itself is booming.

What I did, then, was search for an identical business model of this company in the cannabis industry.

The company I’ve uncovered uses a combination of the superior advantages of Warren Buffett’s business methodology, combined with those of my first ever investment, which I still own today. The outcome is a super-company, which has moved up to the top ranking on my watch list in the past few days.

As a result, I’ve altered my travel schedule completely, to make sure I’m able to wrap-up my research on this business, which looks airtight, as soon as possible.

Donate A Cryptocoin To Our Apis Bull Blog
BTCETHLTCDASHZEC
[cryptothanks]

Apis Bull: Learning how to buy sell stocks and commodities